Last week, the Pew Research Center released research findings in an article written by John Gramlich, entitled “11 states that have the death penalty haven’t used it in more than a decade.”  It’s an interesting read, considering that two states recently geared up their Execution Calendars again:

Until this month, Nebraska had not executed a Death Row Inmate in 21 years.  Tennessee’s August 2018 execution was its first in almost nine years.

Once someone is sentenced to death, he resides on Death Row in the jurisdiction of his conviction.  Whether or not the death sentence is carried out is a different matter from being sentenced to die.

Consider this Pew Research Center graphic:  those in the darker brown are jurisdictions with Death Rows but no executions carried out for 15 years or more: 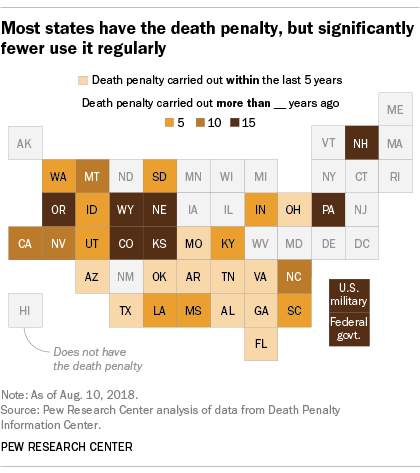 There are several reasons for these growing Death Row populations; we’ve delved into California before, for instance.

However, there appears to be a growing return to active execution schedules in the United States, in what Justice Sotomayor deems a “rush to execute.”  These two August 2018 deaths involved very controversial lethal injection protocols, and there is a concern that using drugs like fentanyl or midazolam is cruel and unusual punishment.

Untested Drugs in Execution Procedures: The “Rush to Execute”

While Tennessee was allowed to proceed, it was not without warning.  Ponder Justice Sotomayor’s dissent in SCOTUS’s denial of a stay of execution for Billy Ray Irick (emphasis added):

As to the prediction that this Court would deem up to 18 minutes of needless torture anything less than cruel, unusual, and unconstitutional, I fervently hope the state courts were mistaken. At a minimum, their conclusion that the Constitution tolerates what the State plans to do to Irick is not compelled by Glossip, which did not categorically determine whether a lethal injection protocol using midazolam is a constitutional method of execution. See Arthur, 580 U. S., at ___ (opinion of SOTOMAYOR, J.) (slip op., at 12). Glossip’s majority concluded only that, based on the evidence presented in that case, there was no clear error in the District Court’s factual finding that midazolam was highly likely to prevent a person from feeling pain. Ibid. (citing Glossip, 576 U. S., at ___ (slip op., at 16)).

As noted, the trial court here came to a different factual conclusion based on a different factual record, as have others. See McGehee, 581 U. S., at ___ (opinion of SOTOMAYOR, J.) (slip op., at 2) (noting a district court’s “well-supported finding that midazolam creates a substantial risk of severe pain”); Otte v. Morgan, 582 U. S. ___ (2017) (SOTOMAYOR, J., dissenting from denial of application for a stay and denial of certiorari) (similar).

If it turns out upon more sober appellate review that this case presents the question, I would grant certiorari to decide the important question whether the Constitution truly tolerates executions carried out by such quite possibly torturous means.

In refusing to grant Irick a stay, the Court today turns a blind eye to a proven likelihood that the State of Tennessee is on the verge of inflicting several minutes of torturous pain on an inmate in its custody, while shrouding his suffering behind a veneer of paralysis. I cannot in good conscience join in this “rush to execute” without first seeking every assurance that our precedent permits such a result. No. M1987–00131–SC–DPE–DD (Lee, J., dissenting), at 1.

If the law permits this execution to go forward in spite of the horrific final minutes that Irick may well experience, then we have stopped being a civilized nation and accepted barbarism. I dissent.